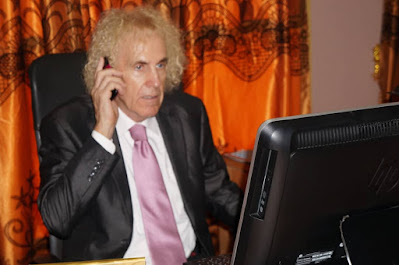 Mr. Steven Tuinstra CEO, President and Founder International Service Group (ISG & Partners) has revealed how the organisation has been creating employment for the unemployed in Africa.

According to the CEO, ISG supports  the private sector in setting up new companies who can in turn employ staff adding that with a financially strong private sector , the concern create economic growth in Africa.

Apparently advocating for financial freedom for the Africa continent, Tuinstra said ''you cannot develop Africa and create a better life for the ordinary people when you dictate your political views and tell the governments of Africa how to run their country''

Continuing,Steven Tuinstra who has lived and worked almost two decades in Africa, and also lived, worked many years in various other countries in Europe and America,said there is a big difference between African culture and Western culture.

The CEO explained that it is very important to solve the infrastructure problem in Africa by cooperating with the various governments in Africa.

''It is crucial that the infrastructure projects can support themselves, this is necessary to not get the governments into financial trouble.

''At the moment, the governments have run into financial problems regarding their infrastructure projects that cannot support themselves, partly due to the corona pandemic. This must be prevented in the future. When governments take out loans of financial institutions, they must strictly fulfill their loan contracts. Otherwise Africa will never get rid of the infrastructure problem''.

Tuinstra said “It is essential that African governments and financial institutions conclude loan contracts where both parties are sure that they can be fulfilled. Then it is no longer necessary to have these meaningless discussions about colonialism.

''ISG & Partners has a unique construction model to actualize this on EPC + F basis.