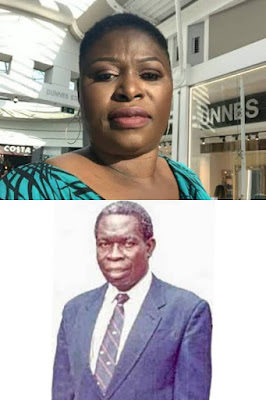 In life, if you allow the devil to use you, the devil will also be the one to suggest your destruction. You can read about Judas Iscariot to find out how the devil operates.

After hearing about the story of Omodele Soyinka, who alleged that Dr D.k Olukoya caused the death of her father and confiscated their property, as Peddled by Maureen, I decided to lunch my usual investigation TO FIND THE TRUTH.

The good of a man will not kill him, and the good deeds of a true man of God cannot be hidden. Maureen and her cohorts will be put in a well-designed part of hell if they don’t repent from this callous voyage that they have decided to embark upon,

Maureen Badejo is a manipulator and a fraudster preying on people’s weaknesses and emotions, and once again I pity those who give ears to her nonsense Ramblings. Moreover, if you listen carefully to those that call into her show to speak on most matters, you will realize deep down that they have personality problems. From our finding we garnered a few personality traits about Omodele Soyinka, and the family members can testify to our findings about her.

Omodele had always been the black sheep of the family, but for her to go this far because of her selfish interest is still a thing of worry, she’s known to be troubled no doubt, she is highly temperamental and always on the left of every positive decision that the family embark upon. Shes exhibited questionable behaviors on the promiscuous side, she was actually given a flat in the building to live but she put it on rent for some reason ,  and her mum has been paying her house rent and child’s school fees ever since , she has stressed her parents sorely. She exhibits fierce anger and she is very reckless with serious matters of life. She moved out of her husband’s house and could not hold any job. It’s obvious that she may be psychologically unstable.

Back to the day’s matter. Just like I said, I will not sleep until the children of God hears the truth about all that MAUREEN IS TRULY ABOUT,

IN SOME EARLIER PUBLICATIONS, I once said that THIS WOMAN IS ON A DARK MISSION, but we all know that DARKNESS CAN ONLY TRY, BUT AT THE END FAILURE IS ITS DESTINATION.

At about 7:23 pm Nigerian time on Wednesday 23rd 2020, I put a call through to Mrs. Soyinka the mother of the Omodele Soyinka that has connived with Maureen to fabricate these allegations , and what I heard from her moved me to tears.

For Maureen to PUT UP SUCH FALSE ALLEGATIONS, without investigating or confirming the matter, then she must indeed be powered by the dark wind of the last days, and this made me wonder in my quiet moments, WHAT EXACTLY DOES MAUREEN WANT FROM MFM OR DR DK OLUKOYA?, WHY IS SHE FABRICATING FALSE ALLEGATIONS AGAINST THE MAN OF GOD, and AGAINST A MAN WHOSE HUMANITARIAN AND PHILANTROPIST NATURE HAS TRANSFORMED LIVES AND STILL TRANSFORMING, OLUKOYA'S RECORDS OF GIVING AND BLESSING MEN IS UNRIVALED.

Mrs Soyinka- Yes I didn't respond because my daughter told me to keep my mouth shot to anyone but but I am ready to speak to you.

Resp- I am ready to clarify all and shed true light on the matter.

Q- Is it true that Dr Olukoya or MFM was responsible for the death of your late husband?

R- No not at all. He was not responsible for his demise at all.

Q- They also alleged that he took over your property and chases out the children?

Q- What about the Issue of the property in question?

Res: - concerning the so called property. Before my husband's death, there were tenants in that house. After burial, one of my late husband's brothers had a meeting with them and implored them to renew the tenancy agreement with me since the house now belongs to me. Sadly, someone else convinced them to do otherwise and they rebelled against me. They refused to pack out after I told them to do so. I took them to court and they were all ordered to vacate. Dr Olukoya is not in the picture of that incident at all. He knows nothing about the saga AS A MATTER OF FACT EVERYBODY IN THAT BUILDING IS A TENANT.

Q- They said Dr Olukoya's attitude towards your husband and coupled with the fact that he refused to reconcile you with him led to his untimely death?

R- That's not true at all. He has nothing to do with that. Hmmm let me tell you a part of the story if you have the time, because this happened about 20 years ago

R- In 1997, I came across MFM through a sister who was a teacher at Maryland comprehensive secondary school. I was staying at Shonibare estate; we used to have an hour prayer meeting together. I noticed that each time we meet to pray together our prayers are always answered, and I marvel.

One day, I asked her what's her position in her church and amazingly she said she was just a member of MFM, and I asked if I could see the GO of her church that is DR OLUKOYA, and she said it's not possible because she doesn't have access to him too. She said in MFM I don't need to have a personal encounter with Dr Olukoya before I get answer to my prayers.

Later, someone told me she could introduce me to Dr Olukoya that I should just write a letter. After a while, i got an appointment and went. But on getting there a pastor attended to me and said we should pray together. During the prayer session he prophetically mentioned all the issues I was battling with, and that strengthened my faith in prayers.

Thus, I started going for an hour prayer session and there was massive transformation in my life and prayer life. I then introduced the prayer pattern to my husband and he agreed. We started praying together and we could see the huge impact in our life and ministry.

When the prayer started, members were rejoicing. The funny thing is that immediately we started the MFM pattern of prayers, the incessant death of Youths in the church stopped, THAT’S HOW I STARTED ATTENDING MFM WEEKLY.

AFTER SOME TIME I told my husband we should move to our own house at Akoka. He agreed. One day , he informed me that he wants to go to the North to rest for two weeks. So he travelled, within the period of the trip I got a call that MY HUSBAND HAD DIED. I couldn't believe what I was hearing. I called the brother I knew over there and that one said he didn't stay with him rather, the Guest house they got for him. Things became difficult for us this period

For over five years I STRUGGLED TO REGAIN OWNERSHIP OF THE HOUSE. And through the intervention of Dr Olukoya, I won the battle. after his death, IT WAS DR OLUKOYA WHO TOOK OVER OUR WELFARE since then AND EVEN SINGLE HANDEDLY TOOK OVER THE EDUCATION OF ALL MY KIDS INCLUDING THIS SAME OMODELE WHO THE DEVIL IS USING TO SAY RUBBISH. (She burst into tears.) I know they are working to ensure that Dr Olukoya stopped supporting us and that's why they are fabricating all these lies against him and his ministry through my daughter.

Take out time to listen to the voice note attached after that, evaluate the person of MAUREEN BADEJO.

To my amazement, Dr Olukoya didn’t even have a relationship with the husband and father of this family and has no connection with the property in question.

Maureen Badejo there is still some little time left, REPENT and apologize