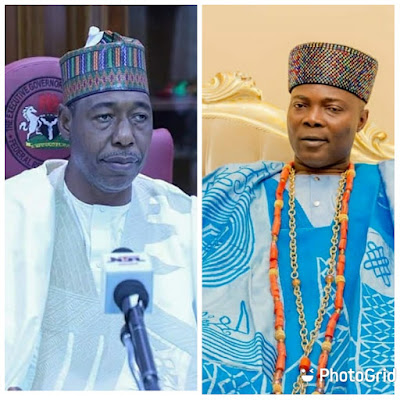 Borno State Governor, Prof. Babagana Umara Zulum has been advised to stop demoralizing the Nigerian Army with his constant condemnation but rather encourage them to boost their morale to tackle the intractable insurgency in the North East.

This admonition was made by the Olowu of Owu Kuta, His Royal Majesty, Oba Hammed Adekunle Makama Oyelude, Tegbosun 111, during a recent chat with journalists in his palace in Osun State.

Governor Zulum, on Monday visited the location along Maiduguri-Damaturu road, the only safe route that leads to Borno State, where Boko Haram insurgents struck and abducted 35 travellers last weekend.

The governor, while inspecting the level of destruction perpetrated by Boko Haram at the scene of the attack, expressed shock and annoyance on how such magnitude of attack was being perpetrated under the watch of the soldiers and police special squads deployed to protect the highway, saying the army has failed to do their assigned jobs.

“…Surprisingly we have a Brigade Commander with his team in Jakana; we also have a commanding officer with his battalion in Auno; both teams cover a distance of only 20 kilometres, and they have failed to protect the commuters. The Nigeria Army has failed us; they have failed in discharging their role of protecting the commuters,” the Governor was quoted.

Reacting to that statement, the notable monarch urged the governor to be less frontally in his attack of the military as they needed all the encouragement and support to battle those insurgents to submission.

“I am disappointed in Governor Zulum for his constant attacks of the Nigeria Army at every opportunity he has over the activities of the vicious Boko Haram insurgents in Borno. He should stop demoralizing the soldiers but rather encourage and boost their morale. I have no doubt in my mind that our military will survive any form of blackmail from any quarter,” Oba Oyelude stated.

The Olowu noted that instead of blaming the military over the spike in the level of insecurity leading to more people being killed in the State, the governor should encourage a symbiotic effort to tackle the menace.

Zulum, since he assumed office last year, has been very vocal in his criticism of security agencies anytime he feels they are not performing.

The Borno governor, who sometimes ignores security advice to visit troubled parts of Borno State, once accused soldiers of deliberately attacking his convoy to prevent him from reaching a troubled fishing community in the state.