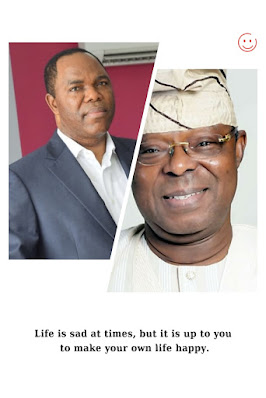 ...His failed law firm turned into an estate agency

Just like many who fell to the wily ways of disgraced former chairman of Skye Bank Plc, Tunde Ayeni, one of Nigeria’s foremost businessmen and founder and chairman of the Honeywell Group, Oba Otudeko, discovered his (Ayeni) true nature when it was a tad too late.

The Forbes-rated billionaire and former chairman of FBN Holdings PLC had almost sealed a multibillion naira deal involving the take-over of ALCON Nig. LTD, a Port-Harcourt-based Engineering, Procurement, Construction (EPC) Contracting company.  ALCON, with over 35 years of experience, is regarded as a highly esteemed organization providing services in the civil, mechanical, electrical and instrumentation fields with excellent performance and sound proven records of projects executed and under execution.

The deal looked like it was dropping on Otudeko’s laps and everybody around him saw it as the perfect icing on the cake of his many lucrative investments. Then, like a bolt from the blues, Ayeni emerged and bought over the company. It was a major business coup that had the old man reeling. He has not forgiven or forgotten that deep cut inflicted on him by a supposed younger friend. And it is one reason he has told anybody who cares to listen that Ayeni is like a devil and whoever wants to dine with him must come with a long spoon.

Effectively, Ayeni destroyed whatever pre-existing or prospective relationship Otudeko had with the company, just like he destroyed Aso Savings and Loans. It would be recalled that the financial services institution providing mortgage banking products and services was brought to its knees by Ayeni who was a majority shareholder and chairman of the institution before he was sacked. Among other offences bordering on money laundering and financial impropriety, the Economic and Financial Crimes Commission, EFCC, in 2015, arrested Ayeni for fraud involving the former Minister of FCT, Bala Mohammed. He was asked to refund the N1billion his bank allegedly passed to Mr. Mohammed in unclear circumstances.

He was also accused of hiding N9.8bn belonging to the Federal Government of Nigeria. According to the Independent Corrupt Practices and Other Related Offences Commission (ICPC), the money, realised from the sale of government assets, was illegally deposited in Aso Savings and Loans Plc which he embezzled.

An ex-director of Aso Savings, Maimuna Aliyu, in a lengthy petition to the ICPC stated, among other allegations including a threat to her life, “Tunde Ayeni has contributed to the bankruptcy of the Bank in no small measure and other BANKS that he has chaired or acted as co-owner by proxy.”

Indeed, as Aliyu stated, Ayeni leaves a trail of destruction on every company he invests in. Skye Bank PLC was a thriving financial institution until Ayeni came on board as chairman in 2011. Five years later, the bank was barely surviving as Ayeni had plundered it comatose. He would later confess to the EFCC that, indeed, he misappropriated billions of naira of depositors’ funds. Ayeni, alongside top members of the bank, was unceremoniously removed by the Central Bank of Nigeria in July 2016 when it was discovered that they had run the bank aground. He is currently working on a plea bargain with the Nigerian government.

The inability to sustain his leadership of the aforementioned companies may be why even his law firm, Olatunde Ayeni & Company originally established in the year 1994 but rechristened

Legal Resources Alliance (better known as LRA), has mutated into an estate agency firm. Though a trained lawyer, Ayeni’s inability to build a business from scratch has hampered the trajectory of the company. Its Lagos office is now a go-to shop for the average Joe looking for property to lease or buy.

If friendship is a form of love with trust as its foundation; it is not so for Ayeni. His former buddy and collaborator, John Darlington, the ex-managing director of defunct Bond Bank, also found out the hard way. Darlington was the kind of man who believed that if he got lost at sea, whoever he calls his friend should sail day and night to find him. He held same thought about Ayeni but the latter didn’t.

A highflying banker in the early to mid-2000s, Edo State-born Darlington was the go-to banker for his businessmen-friends and associates as he freely doled out loans to them. Ayeni was reported to have benefitted immensely from their relationship. Sooner, Darlington ran into troubled waters with the federal government over his relationship and involvement in the corruption allegations levelled against the former Inspector General of Police (IGP), Tafa Balogun. From his Olympian height of fame and fortune, he came crashing down to bare earth. He would later escape death by a whisker following a brain surgery performed on him at a London hospital.

Darlington was out in the cold. He looked right, left and centre and the only person that could bail him out of the hole he had sunk was his emerging billionaire friend, Ayeni. He ran to Ayeni, cap in hand and begged for a lifeline. Instead of helping him bounce back, however, Ayeni employed him as a director in Ibadan Electricity Distribution Company where he was a chairman until his removal recently.

It was a further fall from grace to grass that earned Darlington scorn and jeers from associates who could not fathom how he had to end up working for his friend. Darlington took everything in his strides until he had to resign about a year later when he could no longer bear the taunting from peers and the ill-treatment and derision he got from Ayeni.

Indeed, those who know Ayeni intimately say despite always mouthing ‘God bless you’ whatever the situation is, he is ruthless and no friend or associate, no matter how close they are, is immune from his treachery and backbiting. While life is currently happening to Tunde with his removal as chairman of Skye Bank Plc and the IBEDC, Darlington has gone on to establish JD Capital, an alternative investment boutique oriented towards the West African market and specialized in private equity, venture capital and advisory services.

Like Otudeko and Darlington, kinsmen of the late former Governor of Bayelsa State, Chief Diepreye Alamieyeseigha, under the aegis of the Bayelsa Natives in Nigeria and the Diaspora, B.A.N.N.D, have also accused Ayeni of betrayal. This is contained in a recent widely circulated statement wherein the group alleged that despite all that the former governor did to empower Ayeni, he has only repaid him by maliciously lying on his memory and abandoning his family.

“It came to our notice that when the Economic and Financial Crimes Commission, EFCC, arrested Tunde Ayeni for withdrawing N29billion from Skye Bank, he lied to the agency that he gave the money as a bribe to our brother and illustrious son of the Niger Delta, Chief Diepreye Alamieyeseigha. That is callous and gratuitous. At no time, as far as we know, did Chief Alamieyeseigha have that amount of money in any bank whether in Nigeria or abroad. He was a simple man of the people who gave back to the society that made him. He coveted no riches and he led a simple life.

“What Tunde Ayeni did was to just lie on a dead man who cannot defend himself. This is a betrayal of the friendship we are aware that they maintained while the former governor was alive. Ayeni merely played to the gallery and decided to call a dog a bad name in order to hang it. This is not what friendship is about. And we have no doubt that the man (the former governor) must be turning in his grave at this deliberate and disdainful desecration of his memory.”