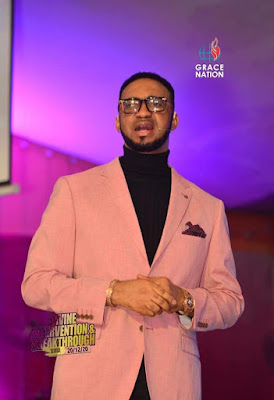 A clergy and the Senior Pastor of Grace Nation (aka) Liberation city worldwide, Dr Chris okafor has adviced Nigerians to follow all the lay down rules and regulations to prevent the spread of the deadly Corona virus in the country

Speaking after delivering his sermon at the Sunday Prophetic service on 10 January 2021 at the International headquarters of the church in Lagos Nigeria, The Generational Prophet of God has he is fondly called said the church is not ignorance of the second wave of the virus, awhich is described as deadly said deadly but no Grace Nation citizen shall be affected with the deadly disease, he remarked that No members of the church was affected during the first wave of the virus, saying the church has put all the necessary protocol in place and with the Prophectic mandate on all Grace Nation Citizen no corona virus can come near them

The Man of God who also remarked that corona virus can not stop him from laying hand upon the sick, challenged the government to put more enlightenment policy in place to educate the general population on the need to observe distance, regular washing of hand and the importance of using a face mask

The words, Deliverance and the Prophetic movement climax the Sunday Service, God uses his servant Dr chris okafor to set various captive free as many submit there life to christ