Gombe, Borno Governors Win Another Governor of the Year Award 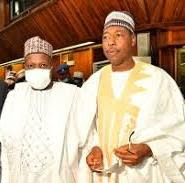 Governor Inuwa Yahaya of Gombe State has emerged as Authentic News Daily 2020 Governor of the Year.

A statement signed by its Consulting Editor, Jacob Onjewu Dickson made available on Thursday January 7, 2021 informed that NIgeria’s Chief of Army Staff, Lieutenant General Tukur Yusuf Buratai has emerged its Man Of The Year 2020.

It informed that Governor of Edo State, Godwin Obaseki is the Authentic Politician of the Year.

Kaduna State Deputy Governor, Dr. Hadiza Balarabe emerged Woman of The Year, ehile President of Nigeria Volleyball Federation emerged Sports Personality of The Year, an award he is winning for the third time, after winning same in 2017 and 2019.

“As it was done in the five previous editions, winners of the awards in the 17 categories have emerged,” it stated.

The statement congratulated the winners, while urging them to keep up the good works that earned them the recognition