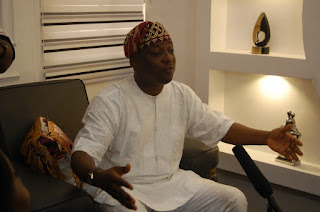 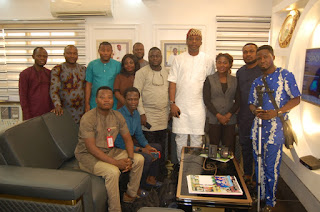 Mr. Tokunbo Wahab who said this during the visit of Lagos State Online Media Publishers Association at his Alausa Ikeja, Lagos Office also said Mr. Governor believes so much in human capital development and to that extent the theme’s agenda have education and technology as a pillar, same way it has health and environment as a pillar. 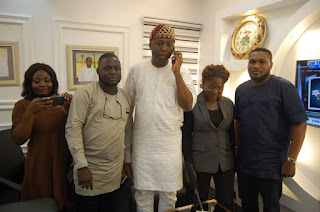 He said, “For us we have gone back to the foundation and that is our resolve. We have to go back to our primary schools so as to make it more competitive with our private schools that are bridging the gap and what we have done in the past few months is that; we have put ‘EkoExcel’ in place. ‘EkoExcel’ allows the teachers to be retrained to a 21st century teachers; it allows the teachers to use the tab as a modern day technique to teach, it also allows you to monitor them and put the curriculum at par across the state.” 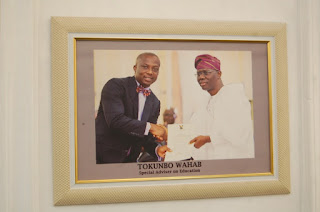 The young and vibrant politician also said, “Whilst we are doing that, we also admits that the state of physical infrastructures across the schools in some parts of the state is not something we are proud of; we would not blame anybody, we are taking responsibility as a government and to that extent we are putting investment on the physical infrastructure, so as to make the classrooms habitable for these pupils. Whilst doing that, we are also putting in place other infrastructure for them. In all these we are doing, we are also saying to ourselves, we must reduce the ratio of teachers to students and that has led us to start massive recruitment of teachers from primary to secondary school levels.” 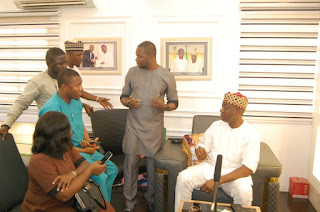 He said; “In our secondary schools, we try to place a template that will make it seamless for those that leaves our primary when ‘EkoExcel’ is in place to our secondary. We are also trying to review the curriculum to see if it is very possible to get it to our institutions of higher learning where have Michael Otedola College of Primary Education, in Epe and Adeniran Ogunsanya College of Education at Ato Ijanikin, to see if we could try and replicate EkoExcel from there.”

On the plans and progress so far in Lagos tertiary institutions, Wahab said, “All our higher institutions in Lagos State were in dare states when we came in. And I thank Mr. Governor for signing out a bailout for each and every one of them. Michael Otedola College of Primary Education, in Epe had a 200 million naira bailout, LASU had almost N400 million, Adeniran Ogunsanya had about N350 million bailout funds to take care of debts they have owed over the years.”

“We went to LASU which is about 36 years old; and we told Mr. Governor that we must be audacious to the school to make it competitive and global and to that extent we had a massive infrastructural deficit on ground. So, we did what has not been done before in the history of this country in LASU in December, we gave 8,272 hostel bed spaces for LASU students in a PPP project. We didn’t spend a kobo of the state fund to get this; tax payers’ money is intact. However, in the course of time LASU and Lagos State Government will generate billions of naira as concession fee and equity share holders in due course and LASU after the expiration of the contract we still own those hostels. We are also planning to replicate these across the state institutions.”

On the peaceful atmosphere of learning being experienced since the Governor came in about a year ago, the Special Adviser said; “That again we have been able to put in place. Since Mr. Governor came in, remember there was a problem at Lagos Polytechnic before we came in? What we had to do is set up a visitation panel which will be winning-down any moment from now and we have promised to implement every recommendation from that panel. There is now industrial harmony at Adeniran Ogunsanya College of Education with the appointment of a new provost which was seamlessly done.”

He however said, with all these, the government won’t neglect other sectors of the economy and critical infrastructures like roads and others in the state but that they have to make sure that people that manages these sectors are educated and healthy so that the governor’s efforts wont go to waste and the State can only achieve this through high human capital development.

He said; “Mr. Governor has put his skin in it now by increasing the 2020 budget on education by 63% and more than 40% increase on health which is unheard of in the history of Lagos State. That tells you his conviction and believes and where his heart lies. So, that is where we are.”
at February 01, 2020