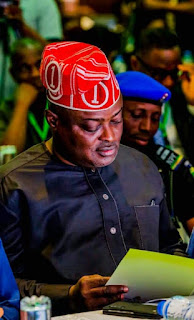 Fresh series of plots being hatched against the Speaker of the Lagos state House of Assembly, Rt. Hon. Mudashiru Obasa, by his traducers have been uncovered.

The plots, a four-pronged strategy, are believed to be the second phase of the plans masterminded by some alleged individuals using the media to malign the Speaker in what is now believed to be "an attempt to pull him down by all means."

Available information shows that four new strategies are being adopted following the failure of an initial plot against Speaker Obasa which included the use of mostly doctored or alleged fake information and documents said to have been stolen from the State House of Assembly as well as claims of money appropriated for events not held.

One of the new strategies, it was learnt, is a plan to sponsor a protest against the Speaker over allegations of corruption which have all been debunked by the House of Assembly.

Findings have also indicated that on the table is the card of a plan to link the Speaker with a series of properties. Already, sources  close to the plotters have hinted Obasa's camp that photographs of the supposed properties are already being taken and these include houses and other assets with valid owners.

The source was quoted as saying, "The photographs are already being collated and they are meant to be released soon. However, there are issues which stem from the need on our side to give the accurate impression. So those saddled with the responsibility among us as trying to ensure there are no lose ends that would make public not believe the story."

Recall that against what some analysts have argued as financial and banking impossibility, the Speaker was recently alleged to have 64 accounts with different names and dates of birth linked to his BVN.

According to the insiders, who spilled the plots, a third plan is to link the Obasa with any possible criminal act that may have been committed in the past by anybody believed to be close to him.

The plotters are of the view that this would put the Speaker on the defensive as he would, like the previous plots, work hard to wriggle his way out of the allegation even though it could be false.

The fourth plan, which a source said was being critically considered, is to link Obasa with Kingus Ltd, a company owned by a relative and which has had a relationship with the Lagos State Government for some years running.

Baring any unforseen circumstance, the plots are reportedly in top gear, it was learnt.

Recently, there have been allegations from Sahara Reporters, an online medium, which released what it termed exclusive stories about the Speaker.

However, each item of the reports has been deflated by either Obasa or members of the House of Assembly.

The House, sometime ago, released facts relating to an alleged N17 million said to have been spent on the Speaker's guest House. From the reaction of the House, it was discovered that several items and offices are serviced with the sum.

Another report claimed that money was budgeted for Christmas party that never held. However, videos and photographs of the event have since dented the veracity of the report.

Meanwhile in reaction to the claim linking the Speaker to 64 accounts, a financial expert, who does not want his name in print, argued: "I stand to be corrected, it is certainly impossible and extremely difficult for one and same BVN number to be shared by Ajayi Mudashiru Obasa, Obasa Abdulrahman Gbadunola and Gabriel Adedoyin Savage except if the other two are minors and are also his children or wards under him.

"So we need the means of identification used to enable us arrive at reasonable conclusion. Differences in date of birth can also not fly because the BVN data bank will reject it unless a sworn affidavit is submitted to harmonise the differences in dates of births failing which d accounts will be restrained.

"It's only one date of birth that is admissible and it should be the one backed up with affidavit. Hence, it's not possible for two different dates of births to enjoy same BVN number."

While some Nigerians believe that the goal of the nocturnal battle is simply to diminish his ranks ahead of 2023 and as such ensure that he does not end his tenure as Speaker, others have been asking questions about what sin Obasa could have committed to warrant the desire to bring him down.